I haven't been very productive lately.  This, combined with things in my personal life, has prevented me from posting much.  So I think it's time to take a break.
Posted by Narmer at 5:58 PM No comments:

Two Boons and a Flaw

Force Sensitive - Required to be a Force user.

I can't think of a good name for it right now but - Physiologically unable to speak Galactic Standard.
Posted by Narmer at 9:21 AM 1 comment: 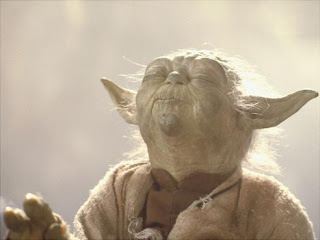 I think two things that help make a good Star Wars game is the atmosphere and the way the Force is handled.  And the way the Force is handled contributes significantly to the atmosphere.  For the BoL version I want Force powers to be as simple and streamlined as possible.  One thing I don't like about the WEG's version is how complicated they made force powers.  Multiple rolls, etc., to complete one Force task.  It doesn't seem to flow to me.

The Force will be handled similarly to the way psychic powers are used in Barbarians of the Aftermath.  I will approach it the same way as magic except that the Force user will be limited by his rating.  So, Jedi 0 can perform cantrip equivalents, Jedi 1 can perform magnitude 1 equivalents, etc. 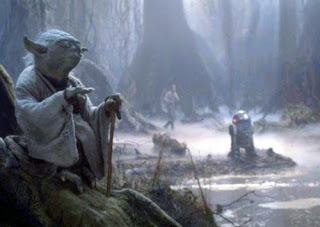 This seems pretty straight forward to me but the next question didn't.  Should Force powers cost power points of some sort?  My first reaction was that it shouldn't cost anything.  Particularly in the prequels, or at least what I have seen of them, Jedi seem to have unlimited use.  But then I thought of the scene in The Empire Strikes Back when Yoda lifts the X-Wing out of the swamp.  This act seemed to tire him out.  Yes, Yoda was old and fading by then but it does imply that using the Force has a cost.

My solution to this is to have Force use cost but to double or triple the initial points plus their Jedi (or Sith) level.  Or, perhaps better, would be to start the power level as usual but add 5 points for each time the Force user gains a level.

Thoughts?
Posted by Narmer at 10:34 AM No comments:

Combining Brawling and Melee and adding a Pilot or maybe Starship, Vehicle or Gunnery ability has an appeal.  Someone else on the 33rd post of original thread suggested Close Combat, Blaster, Pilot and Defense.

Would the Ranged ability cover starship combat?  Or should that only be used for personal combat?  Should a Pilot or Gunner career cover this?  Usually careers aren't used in combat.

An interesting Wikipedia article on The Force

Wookieepedia
Posted by Narmer at 11:10 PM No comments:

Email ThisBlogThis!Share to TwitterShare to FacebookShare to Pinterest
Labels: resources

Shades of Obi-Wan!  The Barbarians of Lemuria and Stars Wars thread in the forums at RPG.net has been resurrected. A fellow who goes by the handle Fred made an interesting post.  I've taken the liberty of reproducing it.

Re: Barbarians of Lemuria and Star Wars

Here's what I compiled from this thread and the one at Lords of Lemuria, adapted to my needs (with some additional material I came up). I called Force + Justice.

Suggestions and modifications are welcome.

Combat
F+J folds the Brawl ability into the Melee one. In its place, this hack introduces the Stardship ability for space combat. The final configuration is:
Melee
Ranged
Starship
Defense

Careers
Careers have been renamed to fit the Star Wars setting. F+I introduces the Force User career for those characters that can wield the Force. At level zero, this career represents someone who is Force-sensitive, but that has no formal training. Mechanically, it works like the Sorcerer or Wyrd career from other BoL-powered games.

Force points
Force points are what other BoL-powered games call Hero points or Fortune. Every characters starts with 5.

Boons
These are specific Boons and Flaws for a Star Wars game.
Force-attuned: you have 2 extra Force points.
Strong in the Force*: add a Bonus Die to all Force-related rolls.

I'm going to start easy so I can ease into this thing.  I believe I will start with character creation.  Specifically, careers.  Even without WEG Star Wars I can think of a lot.  There are so many possible careers in the universe that I think anything the gm approves can be used.  Here Are a few in no particular order: